IBSD was registered on the 26th April, 2001 under the Manipur Societies Registration Act, 1989. The State Government has provided the newly constructed Science & Technology Building at Takyelpat on Lease basis to the Institute to start with. The State Government has also taken a decision to provide 15 acres of suitable land free of cost and has further committed that once the Institute gets itself established, experimental fields in different agro-climatic zones in Manipur can be arranged later on. Thus the birth of IBSD took place at Takyelpat Institutional Area, Imphal – 795001 (Manipur) on the 26th April, 2001.

In November 1999, 5 (five) Ministers of Manipur with top Government officials, scientists and heads of universities in the State in an unified voice informed a high level delegation of officials and scientists from Department of Science & Technology (DST) and Council of Scientific & Industrial Research (CSIR) Govt. of India about the strong desire of the local people for a bioresources institute in the state.

The Delhi component is located within the ICGEB Campus in South Delhi, which comprises an area of approximately 16 acres. It is situated alongside the Jawaharlal Nehru University and the Sanjay Van in a bush forest area and is close to the NII and NIPGR. The Laboratories comprise a main building, a Guest house facility, Bioexperimentation Unit, BSL-3 Facility, and a number of greenhouses for agriculture related research.

The ICGEB extension laboratory, covering an area of over 3,720 square metres, has been created to decongest the workspace in the existing building. All of the Groups working on malaria, tuberculosis and bioinformatics have shifted to the new wing. The Group working on Synthetic Biology and Biofuel, is also placed here.

The main research areas at ICGEB New Delhi Labs focus on mammalian and plant biology. Biomedical projects are pursued in virology (hepatitis B and E viruses, human immunodeficiency virus and SARS virus), immunology (biology of the immune response and tuberculosis), development of diagnostics and vaccine candidates for dengue viral infection, structural biology (development of synthetic antibiotics, crystal structure determination of proteins and polypeptides) and in the field of malaria both in basic research and vaccine and drug development, as well as development of technologies for biopharmaceuticals and for diagnosis of infectious diseases. In the plant biology area, research projects address the study of insect resistance and biopesticidals, abiotic and biotic plant stresses and crop improvement through biotransformation.

ICGEB New Delhi has 25 Research Groups. The Component also has a flourishing PhD programme in association with the Jawaharlal Nehru University (JNU) and at any given time has up to 100 PhD students. In addition, there are approximately 100 junior scientists working in various extra-mural funded research projects. ICGEB PIs have obtained research grants from various funding agencies within the country as well as extra-mural funds from international agencies, such as The Wellcome Trust, European Malaria Vaccine Initiative, European Commission, International Aids Vacine Initiative, National Institute of Health, Bill & Melinda Gates Foundation, Dupont and Pepsico.

ILS is a premier research institute in the area of life sciences and has highly competent faculty scientists actively engaged in advanced research covering infectious disease biology, gene function and regulation and translational research. It has state of the art infrastructural facilities (instrumentation, library, animal facility, high bandwidth internet and computational facilities) for cutting-edge multidisciplinary research in frontier areas of life science research. Currently, ~100 research scholars are working at ILS in various spheres of life sciences. ILS has on-campus residential facilities for the students with in-house dining and facilities for sports and other recreational activities. The ILS buildings are designed to provide convenient access to all areas for differently abled people. 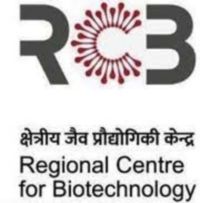 Regional Centre for Biotechnology (RCB) is an academic institution established by the Department of Biotechnology, Govt. of India with regional and global partnerships synergizing with the programmes of UNESCO as a Category II Centre. The primary focus of RCB is to provide world class education, training and conduct innovative research at the interface of multiple disciplines to create high quality human resource in disciplinary and interdisciplinary areas of biotechnology in a globally competitive research milieu. In 2016, RCB was recognised as an Institution of National Importance by the Parliament of India.

Regional Medical Research Center, Bhubaneswar is an advanced research institute in the field of medical science, established in Bhubaneswar, Odisha. It was established in 1981 by the Indian Council of Medical Research (ICMR), New Delhi. The main focus area of research of the institute is on locally prevailing communicable and non-communicable diseases, tribal health and malnutrition in Odisha and adjoining states.

KSBT has a unique scheme of Industrial Association wherein small medium and large scale industries and R&Ds are involved with main aim to carry out collaborative activities. Presently there are many members from several Industry.

Various interactive programmes are conducted every year for the benefit of the member–institutions. Programmes for promoting Industry-institute–Interactions, regional get-togethers of industries, Govt-funded agencies, and R&D are also organized at regular intervals for cross pollination of industrial/academic ideas.